As a leading member of the Board of Trade after the Glorious Revolution in 1688, John Locke investigated and wrote a lengthy plan to reform Virginia laws and policies, including polices of governance and that related to slavery.

In 2017, Holly Brewer published an article in the AHR that proved that John Locke was the actual author of the 1698 Virginia Plan. The document is an assessment of colonial Virginia that reveals the results of the headright system and the structures of government developed under royal directive. The document further provides for John Locke’s suggestions on how to reform the system to make it more in-line with the ideological shifts of the Glorious Revolution.

The Virginia Plan assesses how the policies of Stuart governance influenced the development of the Virginia colony, including the policies that fostered a slavery-based society and a centrally controlled colonial government. Locke’s suggested reforms provide the opportunity to assess what changes the Whigs and William III looked to achieve and what that reveals about their theory of governance. 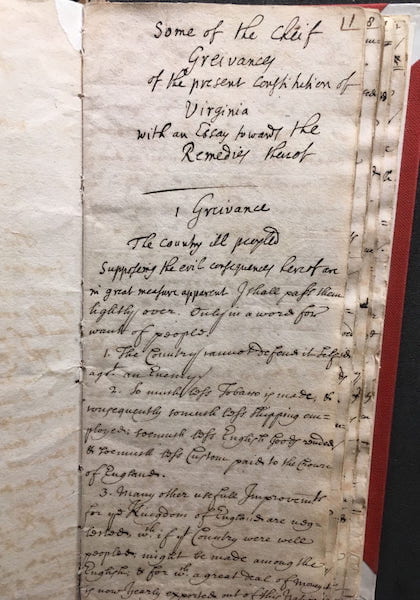 Some of the Cheif Greivances
of the present Constitution of Virginia,
With an Essay towards the Remedies thereof
1. Greivance
The country ill peopled
Supposeing the evil consequences hereof are in great measure apparent I shall pass them lightly over. Only in a word for want of people.